Imagine for a moment that Republicans fail to pass legislation repealing the ACA -- leaving the ACA marketplace intact as a matter of law,  however shaky its economic viability. Imagine further that Trump continues through this year to reimburse insurers for the Cost Sharing Reduction (CSR) subsidies they are obligated by law to provide to qualifying enrollees, but announces that he will cease paying them in 2018 -- declining to contest the suit that House Republicans filed against the Obama administration, challenging its authority to pay the subsidies without Congressional appropriation.

That act of continued apparent sabotage might shake insurers and drive some to exit the marketplace. But having already priced CSR in to their 2018 filings, as they are now doing, they probably wouldn't exit en masse, as David Anderson has argued. Leaving aside other acts of sabotage, forcing insurers to price in and pay out the full actuarial value of all the plans they sell might actually improve the marketplace -- providing a kind of backdoor CSR subsidy for shoppers at the upper end of the subsidy scale.

How would that happen? As Charles Gaba recalled yesterday, in early 2016 Urban Institute scholars Linda Blumberg and Matthew Buettgens analyzed how insurers would likely react if House Republicans won their lawsuit and the courts stopped the executive branch from reimbursing insurers for CSR (assuming Congress continued to refuse to appropriate the funds).  Since insurers could not price the same plans differently for those eligible and ineligible for CSR, they would raise the price of all silver plans sold in the marketplace to cover CSR costs (CSR is available with silver plans only). Insurers would not spread the CSR cost across all metal levels, because then "they would be charging those enrollees for a higher actuarial value of coverage than the enrollees would be provided." Ergo:


the increase in silver plan premiums means that the premium for silver plan (70 percent actuarial value) coverage becomes higher than the premium for gold plan (80 percent actuarial value) coverage. This means that individuals above 200 percent of FPL can obtain higher-value plans at a lower cost if they shift from silver to gold plans. Consequently, virtually all tax credit–eligible individuals with incomes above 200 percent of FPL move to gold plans; their tax credit, computed using the second-lowest-cost silver plan, goes further when used for a gold plan.

"Actuarial value" (AV) refers to the percentage of the average enrollee's medical expenses a plan is designed to cover. In the ACA marketplace, silver (AV 70%) is the benchmark against which premium subsidies are set (that is, subsidies are calculated to render the benchmark silver plan affordable). The cheapest level, bronze, is AV 60%, and the highest level. platinum, is AV 90%.

One thing the ACA marketplace has taught us over the last three years: for people without substantial financial resources, a health plan with an actuarial value of 70% is not adequate -- and is getting more inadequate every year as healthcare costs continue to rise.

The CBO report on the amended BCRA released today drives this point home: not only are the AV 58% plans that are the BCRA benchmark forecast to carry horrific $13,000 single-person deductibles by 2026 , but AV 70% plans are forecast to have deductibles of $5,000. In the ACA marketplace, some silver plans already do have deductibles that high, or higher, though usually with substantial services that are not subject to the deductible.

Forcing insurers to price CSR into silver will raise silver plan premiums by a bit more than $1000 per year on average, according to the Urban Institute forecast (roughly borne out by rate filings thus far for 2018, though the uncertainty-driven hikes are not limited to silver). That means subsidies (keyed to silver plans) rise accordingly -- which creates a windfall for those buying any other metal level. Gold suddenly becomes affordable for those currently stuck with high-AV silver. Blumberg and Buettgens forecast that the gold windfall will draw an additional 400,000 people into the marketplace.

Gold costing more than silver is anomalous on a color chart, but it's not really in terms of value offered in the marketplace -- or rather, it is so only for subsidized buyers with incomes over 200% FPL. For enrollees under 200% FPL, as we've seen, silver plans are "really" platinum. It makes sense for buyers in the 200-400% FPL to be able to obtain plans with AV 80% at a percent of income proportionate to that at which a lower income buyer can get AV 90%, plus or minus a bit. More to the point, AV 80%  is close to the average for employer-sponsored insurance and a more reasonable and affordable norm. If CSR is priced in, most subsidy-eligible buyers should find plans with an AV of at least 80% affordable (at present, about 85% of enrollees up to 200% FPL choose silver plans and so get AV 94% or 87%).

The Urban authors further forecast that insurers will not spread the price of CSR into the ACA-compliant silver plans they offer only outside the marketplace, since doing so would put them at a competitive disadvantage to insurers who choose not to.  CSR uncertainty to date has hurt unsubsidized buyers, as it accounts for the bulk of requested rate hikes for 2018 thus far -- and those rate hikes are spread across all plans. But the CSR change in itself -- and going forward once priced in --  should not affect unsubsidized buyers directly -- though those for whom silver plans are the best fit have an incentive to buy off-marketplace. Conversely, better takeup among the subsidy eligible may help stabilize prices. And the next step -- proposed by Blumberg (with John Holahan) elsewhere, as well as by Hillary Clinton -- would be to cap premiums as a percentage of income for all comers.

1. Blumberg and Buettgens forecast that stopping federal CSR payments would reduce the ranks of the uninsured by 400,000 and cost the federal $3.6 billion in 2016. That's a pretty expensive benefit. For 2016, CBO forecast that 10 million subsidized buyers would cost $27 billion in premium subsidies and $7 billion in CSR. Those insured as a result of CSR payment stoppage are nearly three times as expensive.

2. In addition to proposing a cap on premiums as a percentage of income for all marketplace customers, Blumberg and Holahan, in their 2015 proposal linked to in the final paragraph above, also propose a benchmark AV of 80% for more affluent buyers. Stopping federal CSR payments would effectively accomplish that for subsidized enrollees who don't qualify for CSR.

3. Disproportionately inflating the premium for unsubsidized silver also provides a windfall for buyers of bronze plans, doubtless rendering them effectively free for a substantial number of people (as they already are for some). That may lure some low income enrollees into plans with deductibles in the $6-7000 range.

4. Obviously, distortions like this are not a good way to "make" policy. My point here is that some accidental effects may partially mitigate the damage wrought by administration sabotage.

5. In July 2016, CMS broke out enrollment as of April 2016 in the 37 states using healthcare.gov by metal level -- with silver subdivided according to the level of CSR obtained.  The chart below yields an average weighted AV for marketplace enrollees in those states of 81.4%.  If you convert low-CSR and no-CSR silver to gold, the average weighted AV rises to 83% -- and that includes unsubsidized buyers, who would probably migrate off-exchange if federal CSR payments stopped. Average AV is probably somewhat lower in states running their own marketplaces, since those states, with the exception of Idaho, are also Medicaid expansion states, and so have far fewer low income marketplace enrollees at AV 94%.  Also, as noted above, if CSR were priced in some subsidized silver buyers might switch to bronze rather than gold. 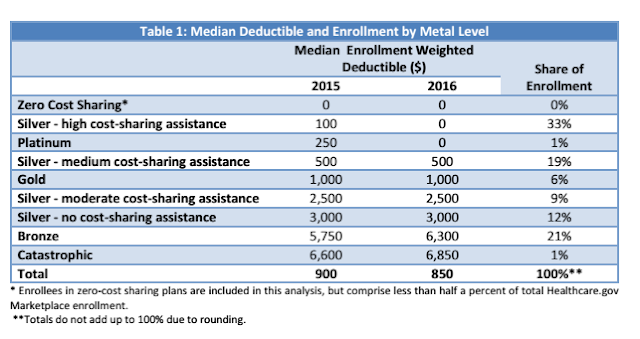 One more caveat: These numbers are as of April 2016, when the first wave of attrition following open enrollment (mostly those who never paid their first premium) had been weeded out, and it's a couple of points higher than it would have been at the end of open enrollment, according to my calculations here. In 2016 at least, bronze plan buyers seem to have dropped out in higher proportions than silver buyers.